The Artist’s Fate 2 – The Recovery 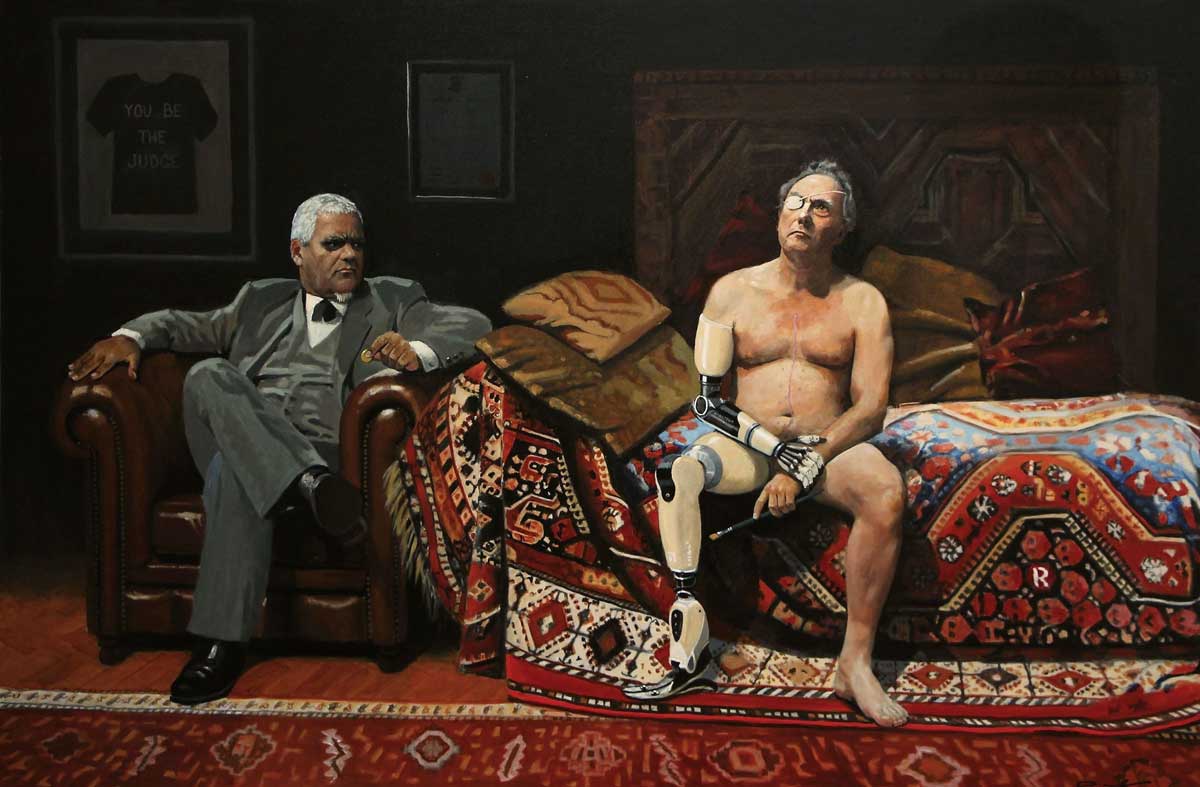 This painting began its life as a sequel to “The Artist’s Fate” *which won the 2011 Sir John Sulman Prize at the Art gallery of NSW.

The judge that year was Richard Bell an Activist Artist from Queensland who told the press that he picked the winner by the toss of a coin and even posted a video on YouTube showing the process.
I was a bit pissed off when I found out because I believed that the win would never be regarded as worthy and I felt that I needed to reaffirm the legitimacy of the subject and my credibility as an artist both to fellow artists and to the general public.

Initially, I was going to show just the physical recovery from the depicted amputations and disembowelment, but then, I thought the psychological recovery would play an even bigger part in the apparent return to normality.

Sigmund Freud’s couch was commandeered to represent this psychological aspect and I planned to put myself in the position of power as the psychoanalyst, questioning Richard Bell and his judging method, but, during some research, I discovered a Richard Bell Video called “Scratch an Aussie” showing him as Freud analyzing a bikini clad, white, meter maid.

By swapping positions and casting myself in the patient’s role, I reasoned that it might force me to analyze my own motives and help me see things from Bell’s point of view.

The whole process has been cathartic and I have shifted from a narrow position of wounded pride to seeing his point about art judging often being a lottery and although I would not recommend coin tossing as a judging method, I have become a supporter of Richard Bell in the more important and much greater issue of his struggle for recognition and equality for Australia’s First People.

Bell’s method, of shocking the bigoted, the racist and the complacent individuals in our society, forces us to at least sit up and take notice and, hopefully, then go on to confront our prejudices with logic and fairness.

This painting is an example of how a work can change during the painting process. It can change in appearance, in its intent, and also in its effect on the artist.

Rather than “The Recovery” this painting could be called “The Activist teaches the Artist to See”. I later changed the “you be the judge” T-shirt in the background to a Recognition T-shirt.